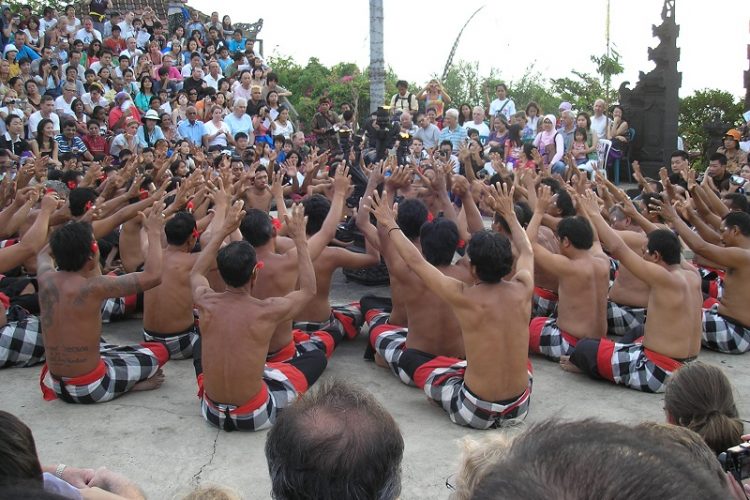 Bali is a very popular tourist island of Indonesia. Famed as the island of Gods, it packs enough diversity and indescribable beauty that make people motivated to visit the island regularly. Right from the mesmerizing hills and mountains to beaches and rugged coastline to breathing in its deep culture and spirituality; the island can be genuinely described as a paradise.

One of the high point cultural and spiritual experiences of Bali is the Uluwatu Temple. Standing gloriously at the shores of the Indian Ocean on top of a steep high cliff of 70 meters; the temple mesmerizes you with its unique character and charm. Combine it with the breathtaking views of the ocean and sunset and sunrise; you experience a taste of heaven.

What adds perfection to it is its unique Kecak (Ketjack) Fire Dance Performance. Missing this cultural treat, which is also famous as Monkey Dance, is like making your entire trip to Indonesia go down the drain.

The Kecak dance starts when the temple is at its best, i.e., at sunset. A sight to behold, the dance is based on a scene from Ramayana and makes a significant impact due to its dominant and powerful use of human vocals as the background of the dance drama instead of the gamelan instruments. The dance is performed at the cliff top amphitheater which is located in the adjacent south of the temple.

The dance starts dramatically with about 150 bare-chested men who had just adorned checked clothes from the waist. They make the entrance with extended arms and shaking hands while chanting the famous monkey chant, ‘Chark-a, chark-a, chark-a, chark-a’ in a fast and repetitive and first form a semicircle first. Post it; starts the enactments of the five episodes taken from Ramayana by the elaborately costumed performers. 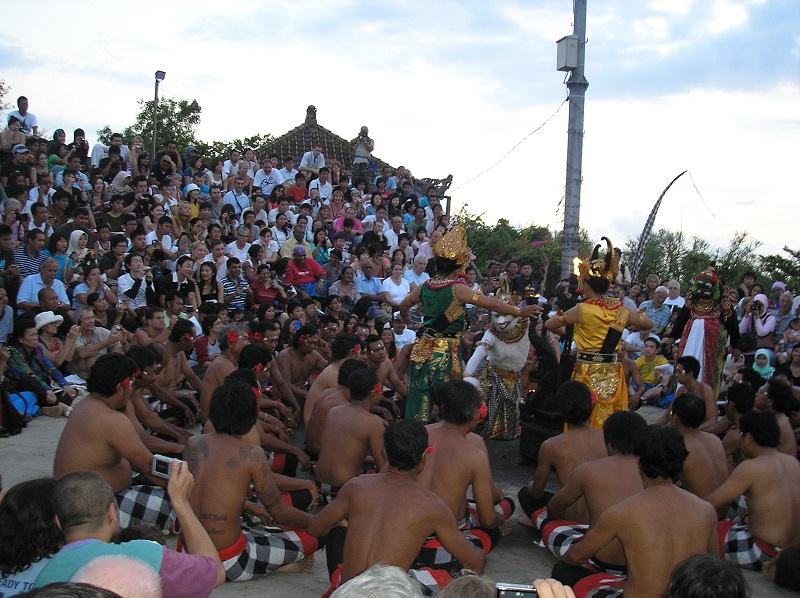 The tempo of the chant keeps changing to slow and fast in sync with the scene which might be of romance, suspense, sadness or happiness. The drama is given plenty of high points and dramatic moments with only fire torches, candles, and few spotlights. The dramatic flair and the choreographed fighting pack with heaps of fun, excitement and even comic interludes to make the entire show gripping and fascinating. The finale of the show creates a whole new level of magic with a dance amidst pits of fire and embers flying high in the air.

Synopsis of the Kecak Dance

As already stated, the dance is based on Ramayana. The story depicted is of Sri Rama, the king of Ayodhya kingdom, being sent to exile for 14 years by his father, King Dasaratha as an outcome of the cunning plan of his stepmother, Kaikeyi. His wife, Sita and his loyal younger brother, Laksham, refuse to leave him and accompany him to exile. The trio goes to settle in a monkey forest and help out the king of the monkeys and get them as his best friends and partner. The setting suits perfect as the temple is genuinely a home to the monkeys.

While they live their happily, the king of the devil, Ravana develops a massive crush on Sita and kidnaps her by executing a wicked plan. Now King Rama seeks the help of the monkey army and his loyal devotee, the Hanuman to trace Sita, declare war on Ravana and rescue the love of his life. The episode depicted here has all the dramas, thrills, and emotions that the characters and Hanuman went through to trace Sita and pass love messages back and forth.

Practical information about the Kecak Performance

This mesmerizing show can be booked as a part of your tour package or separately. It’s a family show which both old and young can enjoy. Since it is a play connected with the Hinduism religion, all are advised to wear modest clothes like shoulders covered and clothes falling below the knees. As a primary rule to watching the show, you must rent and wear the sarong and the sash. You are also advised to never walk in front of people praying or sitting in a position higher than the priest. If you like, you can take pictures with the performers after the show.

Wrapping up on Kecak Dance

The title of the dance, the ‘Kecak dance’ looks a perfect fit due to the wording of the chants which is its backbone. It is indeed a magical dance that must be experienced at least once.

The Kecak Bali dance is ancient; the first original dance was performed in 1930’s. It mixes the  Balinese traditions of arts and religion. According to Wikipedia, the Balinese dances follow the same customs of dynamic, angular and intensely expressive.

There are many locations in Bali to watch this show. However, not all of these places offer the best experience.  My advice is to find the perfect spot that has a beautiful sunset view to watch this marvelous performance.

I would love to hear your views on the Kecak Bali dance. Post your comments below.